Adventures in the Oronsay 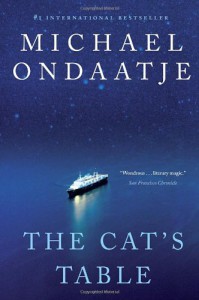 In the early 1950s in Ceylon an eleven-year-old boy is put alone aboard a ship bound for England. At mealtimes he is seated at the insignificant "cat's table"--as far from the Captain's table as can be--with two other lone boys and a small group of strange fellow passengers: one appears to be a shadowy figure from the British Secret Service; another a mysterious thief, another seems all too familiar with the dangerous ways of women and crime. On the long sea voyage across the Indian Ocean and through the Suez Canal, the three boys rush from one wild adventure and startling discovery to another: experiencing the first stirrings of desire, spying at night on a notorious shackled prisoner, moving easily between the decks and holds of the ship. As the secretive adult world is slowly revealed, they begin to realize that a drama is unfolding on board, and the prisoner's crime and fate will be a galvanizing mystery that will haunt them and link them forever.

The author keep saying that this book is fictional, from the story to the characters. It's hard to believe, actually, if we see the details of every events. But one thing for sure, Mynah and his two boys are great observers. Some parts bored me but this novel is beautiful.

He wasn't talking. He was looking from the window of the car all the way